Streptococcus pneumoniae is a Gram-positive cocci, typically lancet-shaped, and occurs singly, in pairs (diplococci), or in short chains.

Presumptive test: Susceptible to optochin (ethylhydrocupreine hydrochloride): When a filter paper disk impregnated with optochin is plated on a blood agar plate previously streaked with a suspect S. pneumoniae and incubated at 35°C for 18-24 hours, S. pneumoniae produce a zone of inhibition (sensitive to optochin).

Confirmatory test: Bile solubility test positive: This test is based on the ability of bile salts to lyse Streptococcus pneumoniae colonies.

Quellung Reaction: Positive
When Streptococcus pneumoniae of certain types are mixed with specific antipolysaccharide serum of the same type or with polyvalent antiserum on a microscope slide, the capsule swells markedly and the organism agglutinates by cross-linking of the antibodies.

Initially, penicillin was the drug of choice to treat S. pneumoniae infections as all S. pneumoniae isolates were exquisitely susceptible to penicillin but now drug-resistant S.pneumoniae (DRSP) possess a serious threat to global health as we are observing an alarming worldwide increase in the incidence. 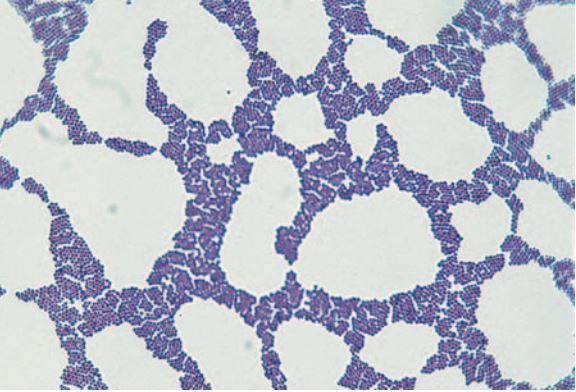 Micrococcus is lysostaphin and furazolidone resistant, bacitracin sensitive and microdase positive. Find the results of Staphylococcus.

8 responses to “Staphylococcus vs. Micrococcus”