Transport media are solutions of buffers with carbohydrates, peptones, and other nutrients (excluding growth factors) designed to preserve the viability of bacteria during transport without allowing their multiplication. The primary objective of using the transport medium is to maintain the specimen as near its original state as possible.

The transport medium aims to preserve a specimen and minimize bacterial overgrowth from the time of collection to the processing.

What does transport media contain?

Transport media contains only buffers and salt. They do not contain nutritional ingredients such as carbon, nitrogen, or organic growth factors to prevent microbial multiplication. Addition of antibiotics and other substances like glycerol may be added for transporting specimens for tissue culture.

What samples are collected in the transport medium?

All types of samples that may contain pathogens but could not be processed immediately require transport media. It may be a stool, urethral swabs, nasal and throat swabs and specimens for tissue culture, etc.

Given below are some examples of transport media with their purpose:

VR medium was used to transport feces from suspected cholera patients. It is no longer used nowadays. Cary Blair media is the ideal and WHO-recommended media for transporting Vibrio cholerae.

Alkaline peptone water (APW) is used to transport Vibrio cholerae only when the Cary-Blair medium is unavailable, and subculture can be done within 6 hours of sample collection.

Used to transport feces from patients suspected of suffering from bacillary dysentery. 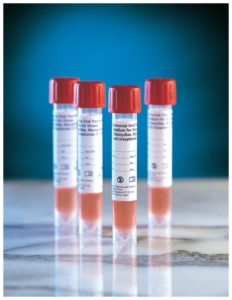 Viral Transport Medium (VTM) is ideal for transporting sample for the diagnosis of viral infections. Ocular, respiratory, and tissue swabs can be submitted in this medium. Fluid samples such as tracheal wash specimens or peritoneal fluid should be submitted in sterile vials, preventing desiccation. In the absence of a viral transport medium, submit swabs in sterile, sealed vials with several drops of saline added to avoid desiccation. Cotton, plastic, wood-handled, dacron, and other synthetic swabs are acceptable. Calcium alginate swabs should be avoided. Bacterial transport media are not appropriate for recovering viral pathogens.

Anaerobic transport medium is a mineral salt base semi-solid media with reducing agents designed as a holding medium for maintaining the viability of anaerobic bacteria It contains buffered mineral salts in a semi-solid media with sodium thioglycolate and cysteine added to provide a reduced environment. Resazurin may also be added as a redox indicator to reveal exposure to oxygen by turning pink. It provides an environment that maintains most microorganisms’ viability without significant multiplication and allows for dilution of inhibitors present in clinical material. Examples include thioglycollate broth.