Clostridium tetani is an obligate anaerobic, gram-positive bacillus with terminal round spore (drum stick appearance). It is the causative agent of tetanus, a vaccine-preventable disease that classically follows a puncture wound by a rusty nail (or any object contaminated with spores of C. tetani). Tetanus is manifested by skeletal muscle spasm and autonomic nervous system disturbance. Tetanus only affects skeletal muscle, smooth muscle, and cardiac muscle function normally.

Tetanus has been known since ancient times; however, its causative organism was isolated by Kitasato in 1889.

C. tetani are primarily saprophytic (lives in the dead or decaying matter) and only incidentally infect humans. There is no person-to-person spread of C. tetani. Human acquires infection when Clostridium tetani endospores are inoculated into sterile body tissues through traumas (for example; lacerations, deep puncture or crush injuries) or fecal contamination of umbilical cord (neonatal tetanus). The organism would grow and produce tetanus toxin in the anoxic zones created by local tissue death.

In normal condition, Glycine and GABA released from inhibitory interneurons induce muscle relaxation by acting on the motor neurons and blocking excitation and release of acetylcholine at the motor endplate.

Lack of inhibitory signals to the motor neurons and constant release of acetylcholine to the muscle fibers leads to irreversible contraction of the muscles and spastic paralysis.

Incubation period of tetanus is about 6-10 days. Shorter the incubation period, graver is the prognosis. Muscles of the face and jaw are often affected first (due to shorter distances for the toxin to reach the presynaptic terminals).

The diagnosis of tetanus is clinical and does not require a demonstration of C. tetani. Treatment should be started immediately based on clinical diagnosis. Laboratory diagnosis provides supportive evidence for confirmation.

Excised tissue bits from the necrotic depths of wounds are more reliable than wound swabs.

Culture is more reliable than microscopy.

As pathogenesis of tetanus is toxin mediated, the association of the isolated organism can only be established when its toxin production is demonstrated. Toxigenicity can be detected by both in vitro and in vivo methods. 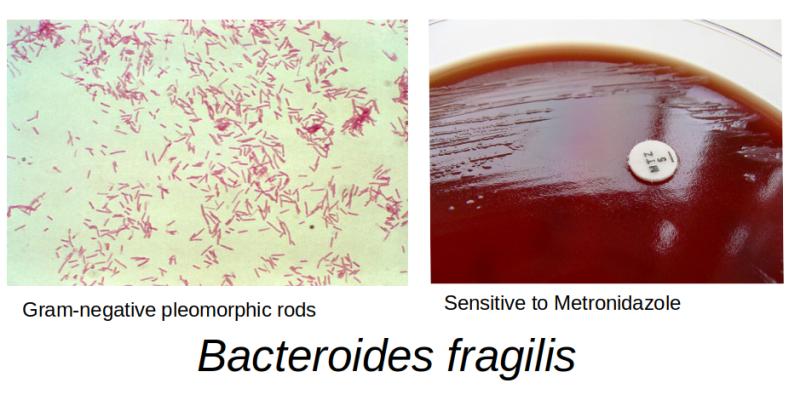 Bacteroides fragilis is a gram-negative, pleomorphic anaerobe responsible for variety of anaerobic infections including peritonitis.