Atmospheric condition is generally satisfactory for the culture of aerobes or facultative anaerobes but for the growth of many aerobes, it is necessary to provide extensive aeration. Forced aeration of cultures is therefore frequently desirable and can be achieved either by vigorously shaking the flask or tube on a shaker or by bubbling sterilized air into the medium. When aerobic organisms are to be grown in large quantities, it is advantageous to increase the exposure of the medium to the atmosphere. This can be accomplished by dispensing the medium in shallow layers or by providing aeration by constantly shaking the inoculated liquid cultures.

B. Cultivation of Anaerobic Bacteria

Main Principle: reduce the O2 content of the culture medium and remove any oxygen already present inside the system or in the medium.
Oxygen is ubiquitous in the air so special methods are needed to culture anaerobic microorganisms. A number of procedures are available for reducing the O2 content of cultures;  some simple but suitable mainly for less sensitive organisms, others more complex but necessary for the growth of strict anaerobes. 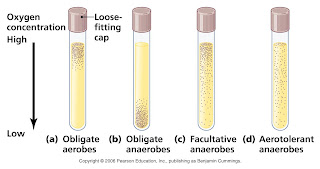 A redox indicator dye called resazurin is added to the medium because the dye changes color in the presence of oxygen and thereby indicates the degree of penetration of oxygen into the medium.
Strict anaerobes, such as methanogenic bacteria can be killed by even brief exposure to O2. In these cases, a culture medium is first boiled to render it oxygen- free, and then a reducing agent such as H2S is added and the mixture is sealed under an oxygen-free gas. All manipulations are carried out under a tiny jet of oxygen-free hydrogen or nitrogen gas that is directed into the culture vessel when it is open, thus driving out any O2 that might enter. For extensive research on anaerobes, special boxes fitted with gloves, called anaerobic glove boxes, permit work with open cultures in completely anoxic atmospheres.
Stringent anaerobes can be grown only by taking special precautions to exclude all atmospheric oxygen from the medium. Such an environment can be established by using one of the following methods:
Tweet
Email

7 thoughts on “Cultivation of Aerobic and Anaerobic Bacteria”

A conical flask is a type of laboratory flask with a wide, flat bottom and an inverted cylindrical neck used in scientific work for transportation, storage, and mixing purposes. It is also commonly...

Biological and chemical laboratories handle different chemicals, reagents, and samples for various experiments. Using equipment made up of plastics is not practical in many instances because plastic...